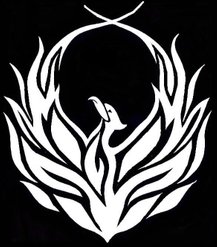 The Magic Garden at Home

Kalanchoe is a genus of the Family Crassulaceae. Kalanchoes are grown as ornamental house plants especially in rock gardens. They are hardy and easy to propagate.

While containing potentially poisonous bufadienolide cardiac glycosides, these compounds also have a positive inotropic effect which serves to weaken the force of muscular contractions. In traditional medicine, Kalanchoes have been used to treat ailments such as infections, rheumatism and inflammation. They are effective sedatives and extracts also have immunosuppressive effects. They have also been used as a traditional treatment for hypertension and body fungus.

The well-known writer Johann Wolfgang von Goethe ate a handful of tiny seedlings each day as a general health routine.

"Various species of Kalanchoe are used medicinally in Southeast Asia, specifically Indo-China and Philippines. Plants of this genus are mentioned in folklore and are used as traditional medicines for treating fever, abscesses, bruises, contused wounds, coughs, skin diseases, infections, hypertension, rheumatism and inflammation and, in particular, tribes in the state of Kerala, India, use these plants for treating cancer symptoms. A variety of bufadienolide compounds have been isolated from various Kalanchoe species, which showed strong antitumour-promoting activity."

This is particularly the case with K. Tubiflora. (see below). 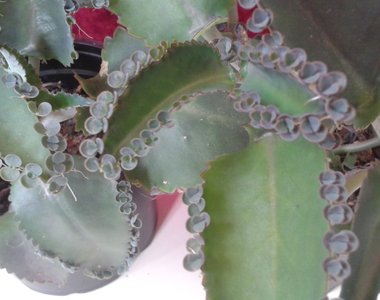 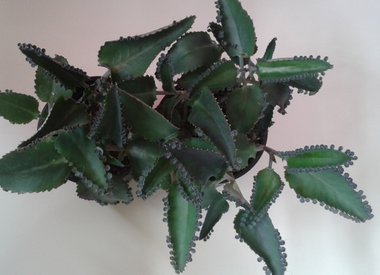 Apart from the spiritual or emotional level of alchemical healing and transformation, there are also many material or physical aspects of the Journey.  Spiritual alchemy is a practical, down-to-earth system that we bring into our lives day to day.

On this page you will find useful information on a variety of healing plants that you can easily propogate and grow at home. Many of these plants are well-known for their ornamental beauty and much of the knowledge of their medicinal potential has been lost to our present, global culture: The modern Western industrial social experiment. 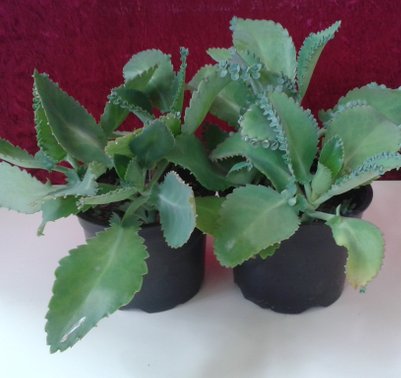 These photos show some of our adult specimens of the Kalanchoe daigremontiana with tiny baby plants on the leaf edges. It was these small plants that Goethe would eat each day. Five different bufadienolides have been isolated from this particular variety and it is the most beneficial Kalanchoe as a seditive, acting directly on the central nervous system. We have several hundred adult plants of the Kalanchoes daigremontiana and laetivierens which, initially, we planted out in like this: 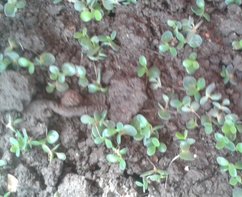 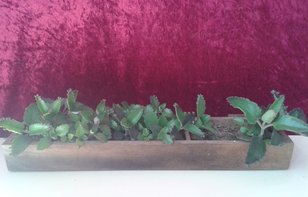 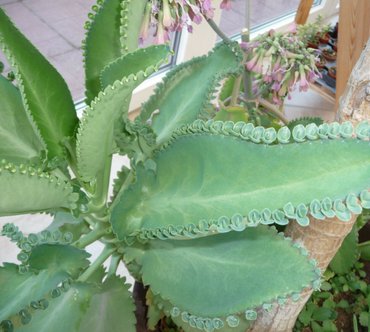 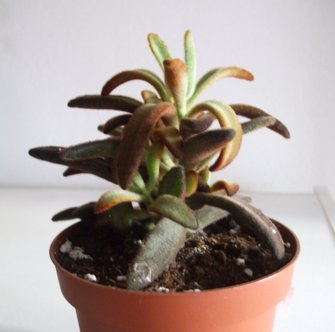 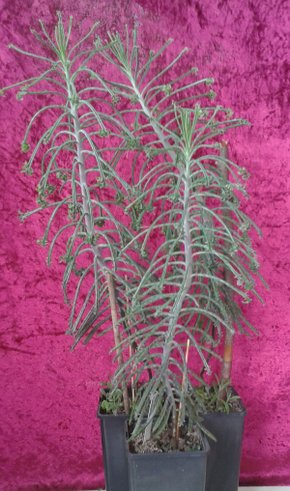 Here we see three of our adult plants with babies visible on the leaf stems. 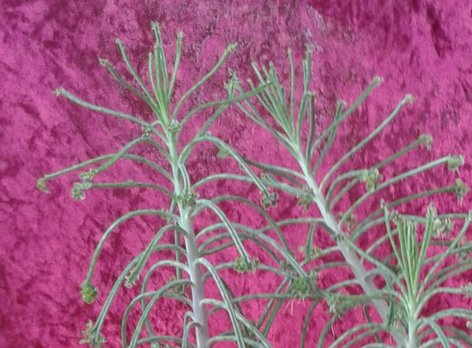 Below is a report from an academic study on the medical benefits of Kalanchoe Tubiflora (KT).

KT is used as a wound-healing agent in traditional South Brazilian medicine.7Few cardenolide and bufadienolide glycoside compounds were isolated from KT in Kuo group. Four of the isolated compounds have the capacity to arrest HL-60 cells in G2/M phase. In our study, we used KT as an example to discuss agents that target mitotic cells.

Plants have chemical defence mechanisms that synthesize a wide variety of compounds that can be used to perform important biological functions and to defend against attack from predators. Many of these phytochemicals have beneficial effects, but some can have adverse or lethal effects on humans. However, no single chemical can effectively treat human diseases without side-effects. Isolation, identification and bioactive tests of pure compounds are standard strategies utilized in studying natural products. In many cases, scientists are not sure what specific ingredient in a particular herb can treat diseases. Whole herbs contain many ingredients that likely work together to produce a beneficial effect. Herbalists tend to use extracts from different parts of plants, such as roots or leaves, but do not isolate particular phytochemicals. They often reject the notion of a single active ingredient, arguing that the different phytochemicals present in many herbs will interact to enhance the therapeutic effects of the herbs and dilute toxicity. However, the activities of compounds isolated from plants are not necessarily parallel to the phenotypes observed in the traditional use of these plants.

A major aspect of traditional Chinese medicine focuses on restoring the homeostasis of the body to maintain health rather than treating a particular disease or medical condition. If used correctly, herbs can cure a variety of conditions, and in some cases, may have fewer side-effects than some of the conventional medications. Here we would like to draw an open question. Shall we keep doing separation? In understanding the role of medicinal herbs in human physiology, one might end up with putting all the isolated components together in order to reveal how therapy works. Hence, we still have a long way to go in determining the most effective modalities of treatment that uses medicinal herbs."

We are all familiar with the Aloe Vera plant. The photo below shows a group of them we have planted in the middle of the shot.

It is well-known as a cream for burns including sun-burn and also as a hand cream and it is widely used in the cosmetic industry. The plant's gel contains many vital nutrients including amino acids and anti-oxidants. It is also anti-bacterial and reduces dental plaque by killing the plaque-producing bacterium Streptococcus mutans in the mouth, as well as the yeast Candida albicans. It will also repair mouth ulcers and reduce constipation. So, a good all-round healing plant for every home medicine cabinet.

There are a few other varieties that we also have growing that are not so well known and which I will detail below.

These two Aloes below are the Aloe Ferox variety.  Its gel has a similar use as that from the leaves of Aloe vera.  It is used as a hair wash to promote hair growth and against dandruff  and as a cosmetic to improve the complexion and to smooth the skin. Aloe gel is also widely used as a hydrating and skin-protecting agent  in creams and liquids such as sun lotion, shaving cream, lip balm and  healing ointments. The leaf ash is used to repel insects. In South Africa Aloe ferox is planted as a live fence. It is also well-known and used as a laxative and has been successufully applied in cases of ophthalmia and syphilis and arthritis.

The two plants in the photo left are Aloe Reitzii variety.

The species is rare and highly threatened and listed as Critically Endangered (CR) in the Red List of South African plants. It is known from only one locality and the subpopulations are declining because of harvesting for medicinal use and damage by baboons. It is actually used in primal religious ceremonies as a magical ingredient. Little is actually known of its specific medicinal uses and it is currently being propagated 'in vitro' at universities in Germany to ascertain its particular medical properties.

The photo below shows our Aloe Camperi.  This is one of the most important medicinal plants in Eritrea, commonly harvested from the wild for local use. It is commonly cultivated for medicinal purposes in Egypt, The gel is a laxative and has anti-fungal properties. 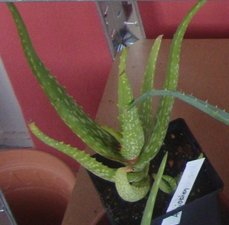 Below left is a (not very good) photo of our Aloe Cameronii Seedlings. Although, as a seedling, the plants are green, the adult plant is red as the photo below. It is also known as the Red Aloe. It is also known as a medicial plant for its wound healing, especially burns. The center photo is of some adult specimens. 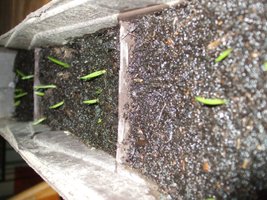 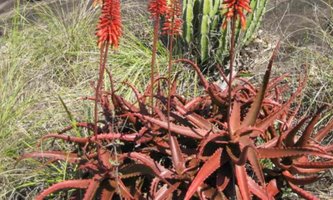